I Love NTRs, and So Should You

To start this off, I'm personally a big fan of manned exploration of other planets. Aside from the scientific benefits, and the landing people on Mars/Europa/Titan/[insert body here] would be cool as hell, I feel in the long term we should get some people off Earth in case something happens that royally messes up this planet. But that's a topic for a different post, one made when I'm not trying to generate some content to actually populate this blog.

In any case, NASA's next big thing is SLS (Space Launch System). There's a few other games in town (Elon Musk and his various efforts, as well as the Russian Angaras and the like look pretty interesting), but for now SLS looks to have the biggest payload of anything in the near future. It makes me very happy that NASA is taking concrete steps toward the development of a genuine heavy lift vehicle, and I sincerely hope that it all goes well, and we get people back on the moon and other places sooner rather than later.

However, there's a minor problem I have with SLS. Well, actually, it's with the payload proposals and upper stages I've seen; they're all chemically powered.

Why is this a problem? Well, chemical propellants (such as LOX/LH2, Kerolox, and similar) have a problem. While they have great thrust (very useful when you're lifting big things out of the gravity well), their efficiency is terrible. At the most, you're only getting about 460 seconds of specific impulse out of chemical propellants, probably a lot less if you're using ones that you can store in space long term. This means that if you want to get somewhere far away (like Mars), you're going to need a horrendous mass ratio (Mass ratio is the ratio of the initial mass of the spacecraft to the empty mass. So, if you have a spacecraft that weighs 200 tons, 100 of which is fuel that you use to get where you're going, you have a mass ratio of 2). Here's a quick little graph I mocked up in MATLAB to show you how your mass ratio varies with delta-V and specific impulse; 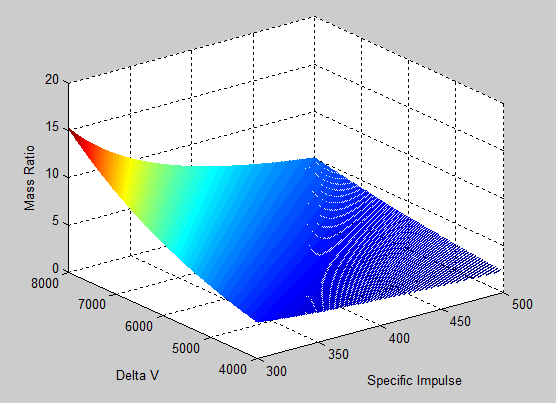 As you can see, it's pretty much an exponential relationship. (A quick examination of the Tsiolkovsky Equation will show why.) For reference, going one way to Mars orbit from LEO takes roughly 5,000 m/s of delta-V, according to my quick and dirty math.

So, what if we can stretch out the specific impulse axis of that graph a bit? Maybe down to around 800, 900 or so. That would be pretty cool, right? But is there anything we could do using today's technology that can get us there?

Well, if we really wanted to, we could build an Orion drive. Some people might be mildly annoyed by that, though. But there is a solution; Nuclear Thermal Rockets!

NASA and friends did quite a bit of research into NTRs back in the 1960s. They even got as far as ground testing one.


Here's a still photo of it;

So, how does that thing work? It's fairly simply. You take your propellant, and put it through the reactor. The reactor heats it up, because uranium or plutonium fissioning tends to make a not insignificant amount of heat, and your hot propellant gets accelerated and flies out the back. It flies out pretty fast, actually.

According to the Atomic Rockets site (which everyone and their children should read), you can get an exhaust velocity of aboot 8 km/s if you use hydrogen as your propellant (light things are better propellants, and hydrogen is pretty light). Which translates to a specific impulse of about 800 seconds. Pretty damn solid, especially compared to chemical rockets. Some of the later design studies I've seen have said we could get up to 950 seconds out of better designs.

This is really, really helpful for your hypothetical Mars/Jupiter/Saturn mission. Reducing the amount of fuel mass you need is going to reduce the amount of launches you need to put your mission together, thereby saving you money. This is important, since NASA's budget currently is about enough to pay for a small pizza, or a six pack of crap beer, but not both. Alternatively, you can still put a massive spacecraft together, but take a less efficient trajectory, and get to your destination quicker. Since spending months in space exposed to cosmic radiation and zero g is a nontrivial problem, this is pretty cool.

So, as y'all can see, NTRs make getting to the far reaches of the solar system quite a bit easier. Unfortunately, I don't think anyone major is currently working on building any. I've heard vague mentions of NASA using a nuclear transfer stage on a Mars mission, but I've yet to see any actual hardware or concrete proposals. Personally, I think this is a big mistake. Even if a mission beyond LEO or the Moon is years away, building and testing an NTR (we can call it NERVA 2: NERVA Harder) would build up valuable institutional knowledge, and help work out any kinks. Sure, it would cost a lot, and involve working with *radiation*, but in the long term it would be more than worth it.
Posted by Scram Cannon at 5:42 PM