A Brief Criticism of “A Rocket Drive For Long Range Bombers”


While going through my folder of pdfs that I have amassed on various topics, I came across a quite interesting one. Saved as “saenger.pdf”, it was in fact a translated copy of “A Rocket Drive For Long Range Bombers” (“Über einen Raketentrieb für Fernbomber”), by E. Sänger (Saenger) and J. Bredt, originally published in August 1944.

Aviation and spaceflight enthusiasts will recognize Saenger’s name almost immediately from his work on the Silbervogel rocket-powered bomber. While the concept was originally formulated in the 1930s, the German military hierarchy did not become especially interested until late in the war, as the situation became increasingly desperate. Though work on the Silbervogel never progressed beyond a wind tunnel model and tests of a few individual components, quite a bit of theoretical work and calculations were done by Saenger in this paper.

I have provided a link to “A Rocket Drive For Long Range Bombers” here. Though I already had a passing familiarity with the Silbervogel concept, I found this paper to be quite interesting, and I learned very much from it. As it’s about 175 pages long, I won’t pick it apart line by line in this blog. However, I did get a few main impressions from it.

The first was the thoroughness of the work. Rather than simply stating that a certain material will be used, or a certain propellant combination will give a certain level of performance, Saenger and Bredt devote several pages to calculating values of various parameters. The downside of this is that it adds to the length of the paper several pages’ worth of equations and graphs. However, such work is necessary when exploring such an untested frontier as transatmospheric flight in the 1940s, and overall, I feel that the inclusion of so many calculations and data points was worth it. 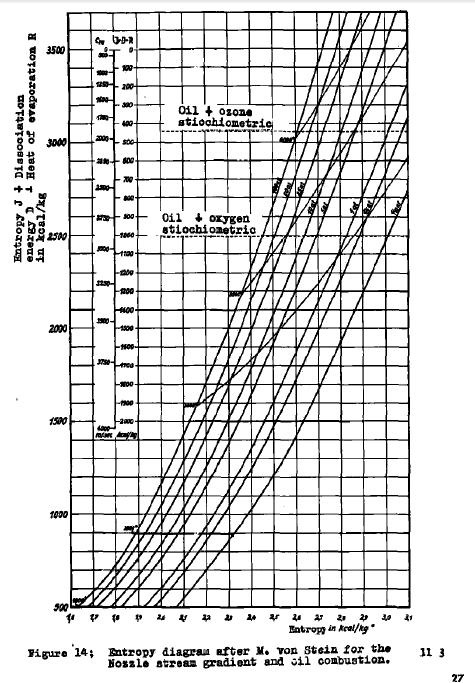 Of minor annoyance was that various letters used for certain variables were different from those I have commonly encountered (for instance, using x for specific heat ratio instead of γ). While this was not a real problem, as there was an index of variables and parameters in the back of the report, it did force me to stop a few times. Not that any of this is Saenger’s fault by any means.

While Saenger’s report was very thorough, I do feel that it was somewhat optimistic in some areas. For instance, performance and flight paths are given for a rocket engine producing an exhaust velocity of 3,000, 4,000, and 5,000 m/s. The first two are within the typical range for engines using liquid oxygen as an oxidizer (which the Silbervogel was planned to do), though 4,000 m/s is honestly a bit high unless LH2 is being used, and the Silbervogel would not have used that fuel. 5,000 m/s is right out; it is beyond even LH2/LOX, and entering that realm of performance requires mucking about with fluorine (always a fun experience). However, there’s a bigger issue; the A4 rocket motor was only producing about 260 seconds of specific impulse at the time, equivalent to roughly 2,500 m/s of exhaust velocity. Assuming that a Silbervogel would have used a similar engine, its performance would have been reduced even further.

By far the most common flaw brought up in Saenger’s work is the heat flow calculations. Apparently, due to an error somewhere in the paper, the Silbervogel would have burned up on its first skip across the atmosphere due to higher than expected heat loads. While I’m not going to run the calculations at the moment, thermal loads at hypersonic speeds are certainly nontrivial. Additionally, at the time the Silbervogel was conceived, the hypersonic flight regime was very poorly understood. Compare, for instance, designs for reentry vehicles from the 1950s; Considering this, it is likely that the Silbervogel design would have required significant refinement before actually flying. This might not have been insurmountable, but it would have required a lot of time and money, which Nazi Germany was not exactly flush with in 1944.

Despite all this, Saenger’s work is very technically sweet, and quite interesting for an aerospace nerd like me. However, I’m having trouble getting around a quite fundamental flaw in the Silbervogel concept.

Given that the spaceplane would have had insufficient delta-V to reach orbit, it would have had to land at an airbase elsewhere. At the time, the most likely candidate was various Japanese held territories, such as the Marshall Islands. This brings up the question of how one plans on getting the Silbervogel back to Germany. Launching it was planned to involve several A4 rocket motors, each of which would have required several tons of fuel, as well as a quite long launch track. All these components would somehow have to be transported to Japan through hostile waters; I severely doubt the ability of Japanese aerospace industry to natively manufacture the required components. Otherwise, the Silbervogels would be consigned to single use weapons; launching once, then spending the rest of the war rotting on a remote island.

Even more damning is the Silbervogel’s small payload. The rocket plane would have had a payload of at most 5 tons (larger payloads were discussed, but were not feasible without an exceptionally large vehicle). This is roughly comparable to Allied strategic bombers, which cost much less than the Silbervogel, and could be made of much greater quantities. Given that even thousands of bombers were insufficient to defeat Germany on their own, it is most unlikely that a few dozen rocket planes dropping 5 ton payloads on New York would force America out of the war. A nuclear weapon is one of the only viable payload with the Silbervogel’s mission profile, however, the poor state of the Nazi atomic program meant that no such weapon would be forthcoming.

While Saenger’s spaceplane was never built, the concept of a winged spaceplane lived on. Designs such as the X-15, X-20, MiG-105, and STS are all similar to the Silbervogel in some way, although it is doubtful that Saenger’s work was anything more than a secondary influence on these designs. Still, I personally find the Silbervogel, and “A Rocket Drive For Long Range Bombers” to be quite interesting, and worthy of discussion.
Posted by Scram Cannon at 4:19 AM